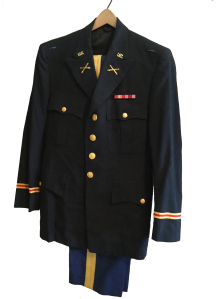 Old uniforms and a quilt for Christmas? Christmas, the most wonderful time of the year…and, for some, the most difficult time of the year. Christmas 1970, the first Christmas without my brother, was a most difficult one for me. He had been Missing in Action in Vietnam since January and we had no substantial leads from the Army of his whereabouts. Our family was still in shock. Is he dead or alive, a prisoner of war?

Christmas, 1969, was so full of hope and excitement. Herby’s presents were under the tree in anticipation of his February homecoming from Vietnam. That didn’t happen. Taking the Christmas tree down was difficult. His gifts were placed in the new cedar chest in his bedroom (a wedding gift from Mom and Dad for him and his bride).

“He will be home one day soon. He will. I know he will.” I said this over and over and over again. You never give up hope. Never. From then on every Christmas was difficult. Even today I can hardly bear to hear I’ll Be Home for Christmas without shedding tears.

Herby’s Army uniforms, Dad’s Army Air Corp. WWII uniform, or rather parts of their uniforms, along with other family treasures, had been stored in the huge family cedar chest for years. Mom eventually gave this chest to my sister, probably some time around 1989, when my parents downsized from the big house on Woolfork Avenue in Donalsonville, Georgia. For years Mom kept Herby’s room pretty much as it was when he left for Vietnam. His uniforms hung in the closet until she finally put them in the old cedar chest. I can still see his Teddy Bear sitting on his antique sleigh bed atop the forest green crocheted afghan Mom made for him. She embroidered a large gold eagle on the center panel.  It was beautiful. Wonder what happened to that afghan.

Dad had searched diligently, tirelessly, working every avenue, every angle he could to get any information about his son. When planning the funeral my sister suggested we place Dad’s WWII uniform in the casket with Herby’s remains as a sentimental gesture.  She would bring it to Washington, give it to the funeral director at the memorial service the day before the funeral, and he’d place it in the casket.

Mom thought this a wonderful idea. Sadly, for reasons I do not know, Dad’s uniform never made it to the funeral home, nor in the casket. When I found this out the day of the funeral, I just couldn’t tell Mom as I knew she would certainly be disappointed. She had been telling everyone, even the reporters interviewing her, about Dad’s uniform being placed in Herby’s casket.

Several years ago my sister gave the old family cedar chest to one of her sons since she was now downsizing. When I found this out, I was hurt she didn’t ask me if I wanted it or any of the contents, but I didn’t question her. (I know I should have.) I really wanted whatever was left of my brother’s things so I finally asked her if there was any reason why I couldn’t contact my nephew to get the belongings I felt should be mine. Her reply, “No reason. His phone number is …” Needless to say, I quickly made a call to my nephew. 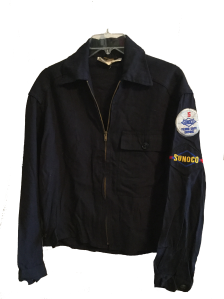 “Oh, no problem Aunt Marylou. I wondered why you didn’t want these things. I’ll bring them to you this Christmas.” He told me there wasn’t a lot left, but he did have some uniforms along with a few photos about Herby’s funeral. He said there was also an old quilt in the chest. I remembered Mom telling about the quilt Grandma Crosby made well over 75 years ago. I had seen it years ago, but long forgotten about it. It’s hand-stitched, a bit frayed in a few places, but still in one piece. Through the years all the other items in the cedar chest must have been given away, sold, or lost in time, who knows, however, the uniforms remained.

My Christmas gifts this year were old uniforms and a quilt, worn, beloved, and priceless Crosby heirlooms. The remaining parts of my Dad’s Army Air Corp. and Herby’s Army uniforms are precious to me. (Here’s a short home movie with him wearing it.) A total surprise gift was a work jacket Dad wore as a truck driver for Sunoco. It has a 5 Years Safe Driving patch on the sleeve. His name is written on the neck tag with a date of 1955 (my birth year).

I’m thrilled to have these precious gifts of old uniforms and a quilt for Christmas. If only those uniforms could talk to tell a few fine stories of the men who wore them. Wonder how many Crosby children have been warmed by Grandma Crosby’s beautiful quilt?

This most difficult time of the year turned out to be a most wonderful Christmas.